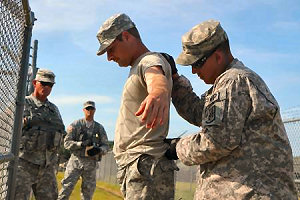 If you're facing a courts-martial in the United States, the Center for Military Law L.L.C. is here to help you. A Courts-Martial is convened to try members of the U.S. military for violations of the Uniform Code of Military Justice (UCMJ), which is the U.S. military's criminal code. Sometimes they can also be convened for other purposes, including military tribunals and the enforcement of martial law in an occupied territory. Courts-martial are governed by the rules of procedure and evidence laid out in the Manual for Courts-Martial, which contains the Rules for Courts-Martial, Military Rules of Evidence, and other guidance. There are three types: Special, Summary, and General.

Offenders in the US military may face non-judicial punishment, a summary court-martial, special court-martial, general court-martial, or administrative separation. A commanding officer, in the role as court-martial convening authority, will consult with the command judge advocate for advice on case dispostition; factors to be considered include, inter alia, the relevant statutory and case law, the seriousness of the offenses, the strength or weakness of each element of the case, the promotion of good order and discipline, and the commander's desire for case disposition.

A non-judicial punishment (NJP) in the United States Armed Forces is a form of military justice authorized by Article 15 of the Uniform Code of Military Justice. Non-judicial punishment or "NJP" permits commanders to administratively discipline troops without a court-martial. Punishment can range from reprimand to reduction in rank, correctional custody, confinement on bread and water/diminished rations (aboard ships only), loss of pay, extra duty, and/or restrictions. The receipt of non-judicial punishment does not constitute a criminal conviction (it is equivalent to a civil action), but is often placed in the service record of the individual. The process for non-judicial punishment is governed by Part V of the Manual for Courts-Martial and by each service branch's regulations.

The Military Police Corps is the uniformed law enforcement branch of the United States Army. Investigations are conducted by Military Police Investigators or the United States Army Criminal Investigation Command (USACIDC), both of which report to the Provost Marshal General. CID does not charge subjects of investigations with crimes. CID investigates allegations of wrongdoing and once an investigation is completed, turns the findings over to the appropriate command and legal authority for disposition and adjudication. Once a person is charged with a crime, that information may become public record through an Article 32 Hearing, Courts Martial etc.

AR 15-6 procedures generally govern investigations requiring detailed fact gathering and analysis and recommendations based on those facts. An "investigation" is simply the process of collecting information for the command, so that the command can make an informed decision. AR 15-6 sets forth procedures for both informal and formal investigations.

In the case of simple, minor offenses the inquiry may simply be a matter of the commander obtaining information from the suspected offender’s chain of command. In complex or serious cases the commander should seek the assistance of law enforcement investigators when conducting the preliminary inquiry.

The CFML is fully versed with all types of Military Law and can help you with your defense. Contact us today.